âWorking Peopleâs Day Of Actionâ Draws Nearly 300 In Buffalo, Workers âDemand An End To Rigged Economic & Political System That Takes Away Their Right To Collective Bargaining & A Voice On The Jobâ 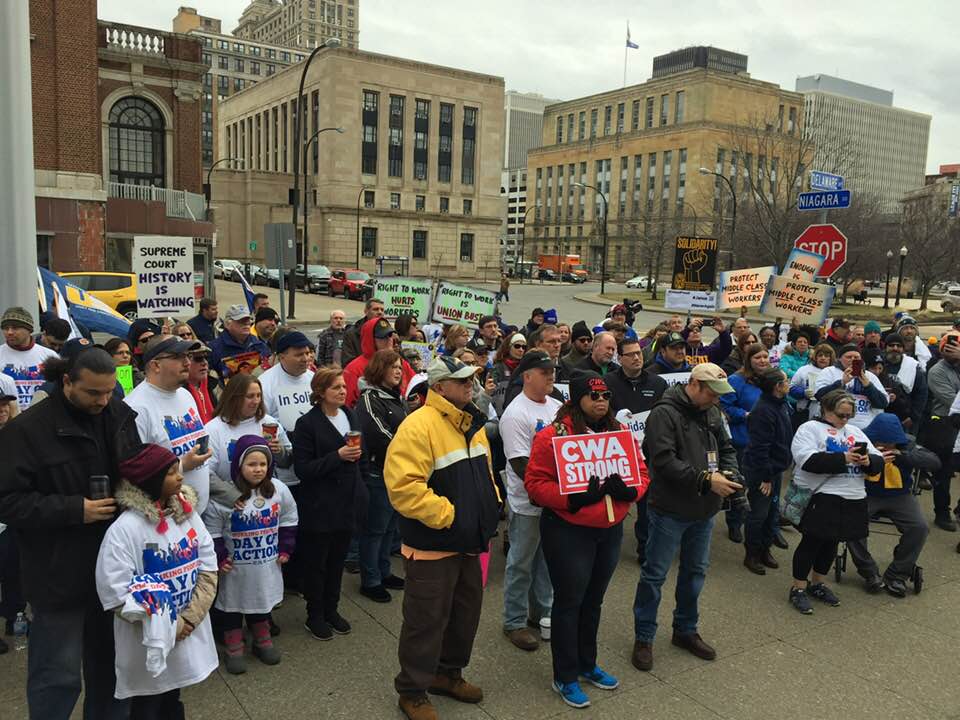 (BUFFALO, NEW YORK) - As part of a nationwide event involving 27 cities across the United States, nearly 300 Working People rallied in Buffalo on Saturday (February 24th) on the Working People’s Day Of Action to demand an end to the “rigged economic and political system that ‘takes away’ Workers’ ‘right’ to Collective Bargaining and a ‘Voice on the Job.’”

New York State AFL-CIO Secretary-Treasurer Terry Melvin (pictured below), one of several speakers who addressed the crowd in front of the Federal Courthouse in Downtown Buffalo, said: “All across the country - Workers, parents, and students ‘are gathering to say enough.’  The ‘attacks on our Civil Liberties, our Social Justice and our paychecks have gone on for too long.’  Buffalo is ‘just one of many cities to stand up in the face of the constant attacks against Working Men and Women.” 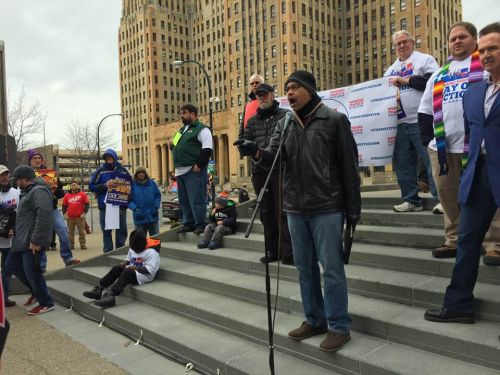 The rallies were also held to call attention to the U.S. Supreme Court, which is expected to hear oral arguments beginning Monday (February 25th) in the case Janus v. AFSCME Council 31, which Labor Leaders says would rig the system even more against Working People by taking away their freedom to have strong Unions and their right to have a Voice on the Job.

The Janus case seeks to overturn the current Supreme Court precedent, set in the 1977 Abood v. Detroit Board of Education case.  That decision held that Non-Members can’t be forced to pay for Unions’ political activity, but they can be required to pay an “Agency Fee” or “Fair-Share Fee” to cover the costs of representation.  If the Court rules against Labor, Unions would be forced to represent those Members who opt out and decline to pay Union Dues.  However, those Members would still be represented by their Union in Collective Bargaining. 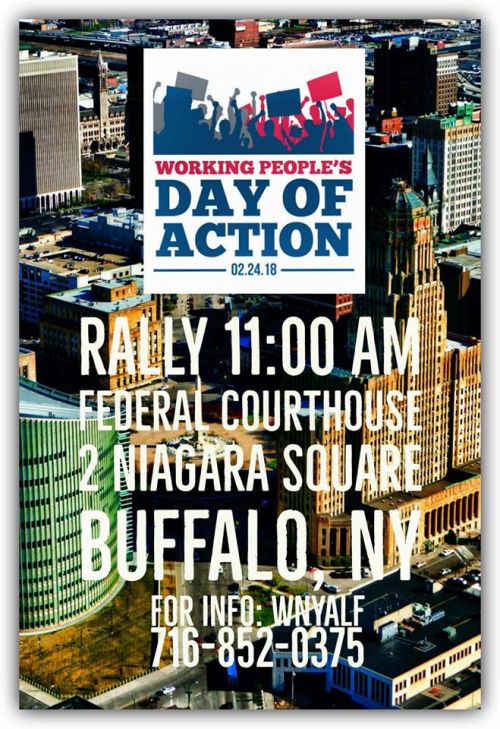 “The Janus case ‘threatens the viability’ of Labor Unions and Collective Bargaining will ‘fall apart’ for Working Class People.  ‘Beyond better pay and benefits, being part of a Union means you’re part of a movement that’s fighting to achieve justice and opportunity for all,’” Western New York AFL-CIO Area Labor Federation President Richard Lipsitz (pictured below) told those at the rally - adding: “No matter what happens, no matter who tries to divide us and get in the way of us achieving a decent living for ourselves and our families, Working People will remain united.” 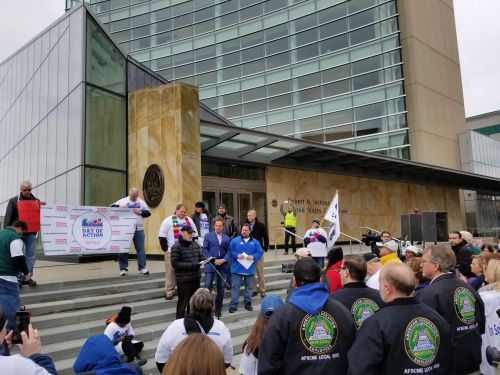 A number of other Local Labor Leaders, Community Leaders and Elected Officials spoke at the rally, joining in the call to “end policies that benefit only the wealthy and powerful few at the expense of everyone else.”  The rally, they said, also “builds on the legacy of Dr. Martin Luther King Jr., who fifty years ago supported striking Sanitation Workers in Memphis, Tennessee, ‘in their demand to join together in a strong Union and to be treated with dignity at work.’” 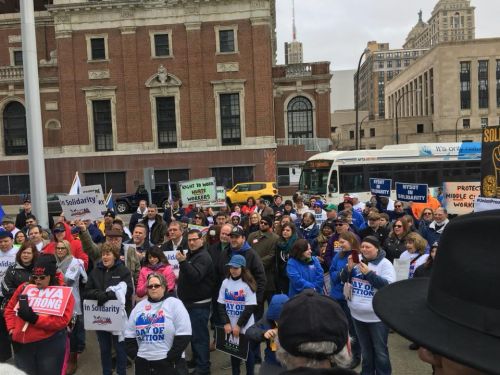 Also in attendance were a number of representatives from a number of area Labor Unions, including the American Federation of State, County & Municipal Employees (AFSCME), the Civil Service Employees Association (CSEA), the Communications Workers of America (CWA), the United Steelworkers (USW), the New York State United Teachers (NYSUT), the Buffalo Teachers Federation (BTF), the Painters Union, the Service Employee International Union (SEIU) and the Teamsters, to name but a few. 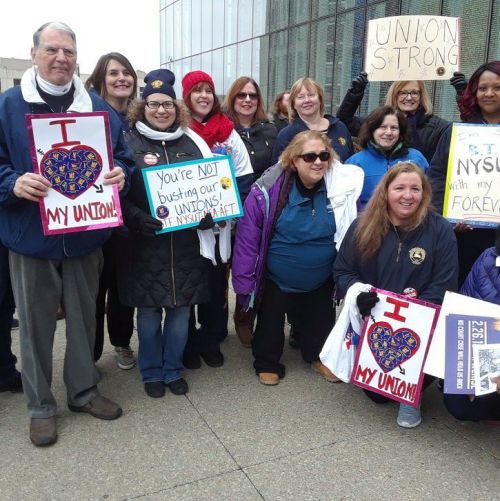 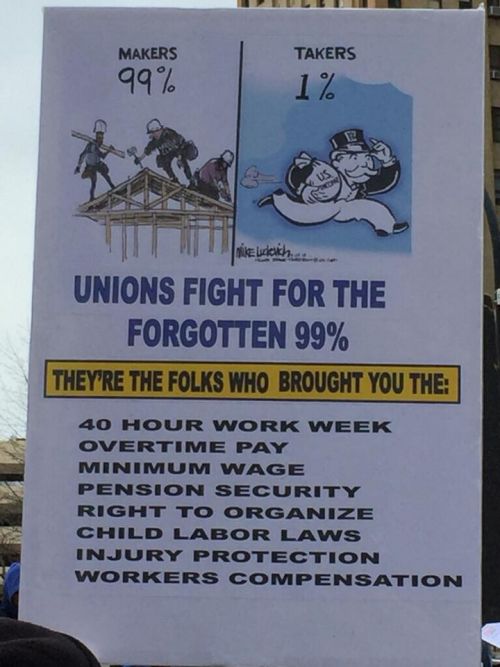 NAACP Buffalo Branch President, the Reverend Mark Blue, said: “The Faith Community ‘remains united with’ Working People and Western New Yorkers ‘of all races and backgrounds to demand an end to an economy that’s rigged against us.’  ‘We will rise to defend the freedoms that Dr. King fought and died for, like the freedom from want, the freedom from hate, the freedom to vote, and the freedom to join together in strong Unions.’  ‘We have a duty to pick up the mantle that Dr. King left and build a loving, moral army to bend the arc towards justice.’”

West Seneca Teachers Association President Joe Contafio (pictured below) also spoke at the rally, saying: “I am the ‘proud’ son of a UAW (United Auto Workers) Member ‘who taught us that if we worked hard we had the opportunity for the American Dream.’  I, ‘through the promise of public education’ attended public high school and SUNY (the State University of New York).  ‘Because of Unions standing arm in arm we turned back the hedge-funders who wanted to make our students a test score and schools were a way to make a profit.’  ‘We together said, not here!’  ‘Not now!’ And again, ‘we now say the same to those one-percent who want to rig the system against us.’  ‘We pledge to protect the promise of education and the American Dream for all - not just the privileged.’” 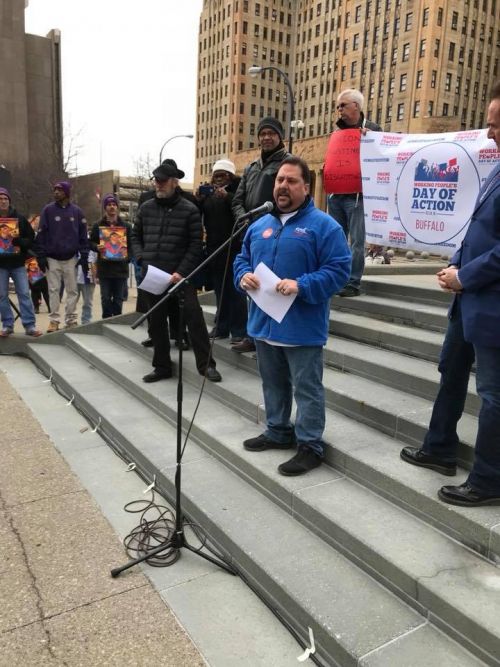 Richard Bartolotta (pictured below), a Blue-Collar Worker represented by the American Federation of State, County & Municipal Employees (AFSCME) in the City of Buffalo, also spoke, saying: “Too many in Buffalo and Western New York ‘are working harder and longer for less.’  A ‘handful of corporate elites, divisive extremists and corrupt politicians are rigging the rules and our economy in their favor.’  ‘If the (Supreme) Court sides with them, they would tilt the system even more against Working People and weaken our ability to stick together in Unions to make progress.’” 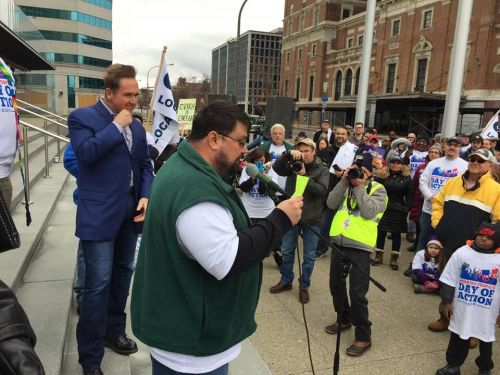 Those Workers and their allies who took part in Saturday’s rally in Buffalo also said they “remained committed to fighting against” Economic Inequality and Political Exclusion.

The Working People’s Day of Action is just one in a series of events to commemorate the 50th Anniversary of the Memphis Sanitation Workers’ Strike during the month of February - which is Black History Month, while bringing attention to the present state of the American Worker. 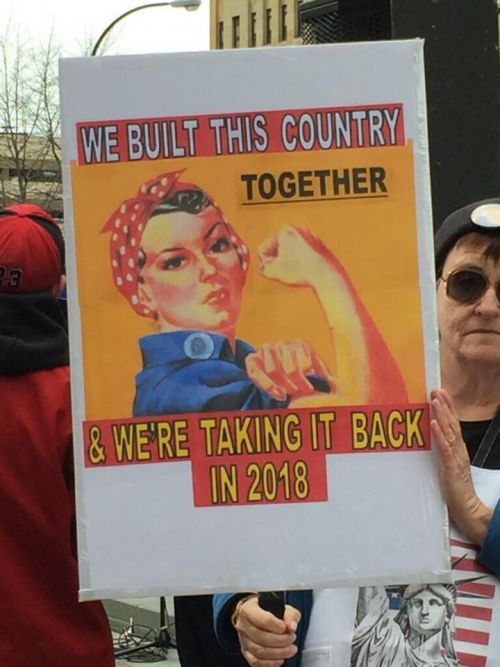 WNYLaborToday.com Editor’s Note: The photos that appear with this Labor News Report are courtesy of several Western New York Unionists, including Painters District 4’s William Mayer and WNYALF Representative Angela Blue, among others.  Your On-Line Labor Newspaper would like to Thank All for the having the opportunity to use your photos in our Labor News Story. 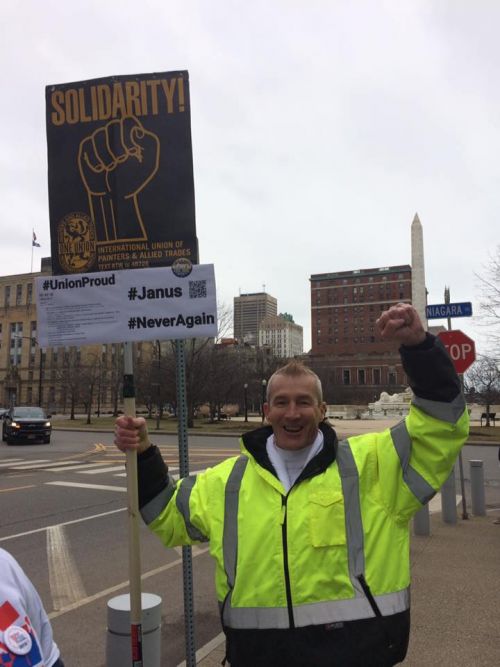