Suburban Buffalo Headquartered Tops Employs More Than 14,000 Workers/Company Says It Has âSufficient Liquidity To Support Operationsâ At Its 169 Full-Service Supermarkets 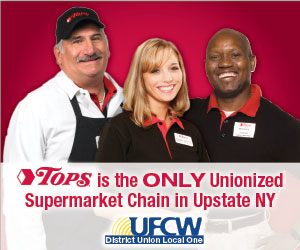 (WILLIAMSVILLE, NEW YORK) – Tops Markets, which employs more than 14,000 Workers at its 169 full-service supermarkets across Upstate New York, Northern Pennsylvania and Vermont, announced today (Wednesday, February 21st) that it will restructure its debt under Chapter 11 of the Bankruptcy Code.  However, Management at Tops’ Suburban Buffalo Headquarters in Williamsville said its store operations will remain unaffected by the move.

With that said, how will Tops' bankruptcy restructuring impact its Union-Represented Workforce, who are represented by the United Food & Commercial Workers (UFCW) Local One and the Teamsters, which is currently embroiled in a dispute over $16 million in pension money for its Members?

Especially because Tops is the only Upstate New York Grocery Store Chain that is Unionized.

Over the past several months we have been meeting with Financial Advisors hired by our International Union to continually monitor the finances of Tops Markets.  As reported earlier, the company has hired Evercore (a Global Independent Private Investment Firm) to help them restructure their enormous debt.  Since mid-January, UFCW Local One has been consulted by our legal team consisting of Health Care, Pension and 401K attorneys and an attorney that specializes in restructuring and bankruptcy filings.  We have additional meetings set up to discuss more strategies to hit this situation head on.  Currently Tops Markets is paying all contractual obligations including Health, Pension and 401K contributions.  The contract for UFCW Local One’s 12,000 Tops Members is in full effect. We are monitoring this situation daily and will keep Members informed of new developments.

The Teamsters - which represent 350 Workers employed at Tops Markets’ Warehouse Distribution Facility in the Buffalo Suburb of Lancaster, did not release an immediate statement (See WNYLaborToday.com’s August 23rd, 2017 Labor News Story, headlined: Teamsters Auditor Travels To Buffalo To Review Tops’ Books As Dispute Over $16 Million In Pension Money For Its Union-Represented Membership Continues).

In a statement, Tops Chairman and CEO Frank Curci said that all stores will remain open as Tops Markets pursues voluntary financial restructuring to "better position our business for long-term success."  The move comes as Tops struggles to rein in a hefty debt load and to cope with increasing competition from other supermarkets. (For More, Read: Tops Owners Could Prepare for Bankruptcy, at: www.bloomberg.com/news/articles/2018-02-17/winn-dixie-and-tops-owners-are-said-to-prepare-for-bankruptcy).

Tops said it expects to receive the court's permission to continue to pay Employee wages and benefits and to pay vendors and suppliers in full for goods and services delivered after today's filing date, according to a story in The Buffalo News.

The purpose of a Chapter 11 filing is to allow it to reorganize and emerge stronger than before and the process allows a company to restructure its debt so that debt load is lighter and its payments are more affordable, The News said.

As of last Summer, Tops reported having more than $720 million in debt and was required to make annual interest payments of $80 million, according to the most recent publicly available financial information, The News reported.  Tops said it is working with certain holders of more than 65% of its senior secured notes, due in 2022, and is "continuing constructive discussions," the newspaper said

WNYLaborToday.com Editor’s Note: Additional information on Tops reorganizational filing is available on the company’s web site: www.topsrestructuring.com.  A Tops press release can be accessed directly at www.topsrestructuring.com/wp-content/uploads/2018/02/Tops-Press-Release-2.21.18.pdf.  In addition, The Buffalo News story on Tops can be accessed at: http://buffalonews.com/2018/02/21/tops-to-file-for-chapter-11-bankruptcy-says-stores-to-continue-as-normal/ and UFCW Local One’s statement can be accessed at: http://ufcwone.org/story/statement-regarding-tops-market-bloomberg-report.