âIt Was âUnbelievable,ââ Women Of Steel Regional Council Chair Cindy Marlow Said As The Items Were Distributed To Those In Need. â(The Recipientsâ) Reaction Was More Of âDisbeliefâ (That Someone Would Do This For Them).â 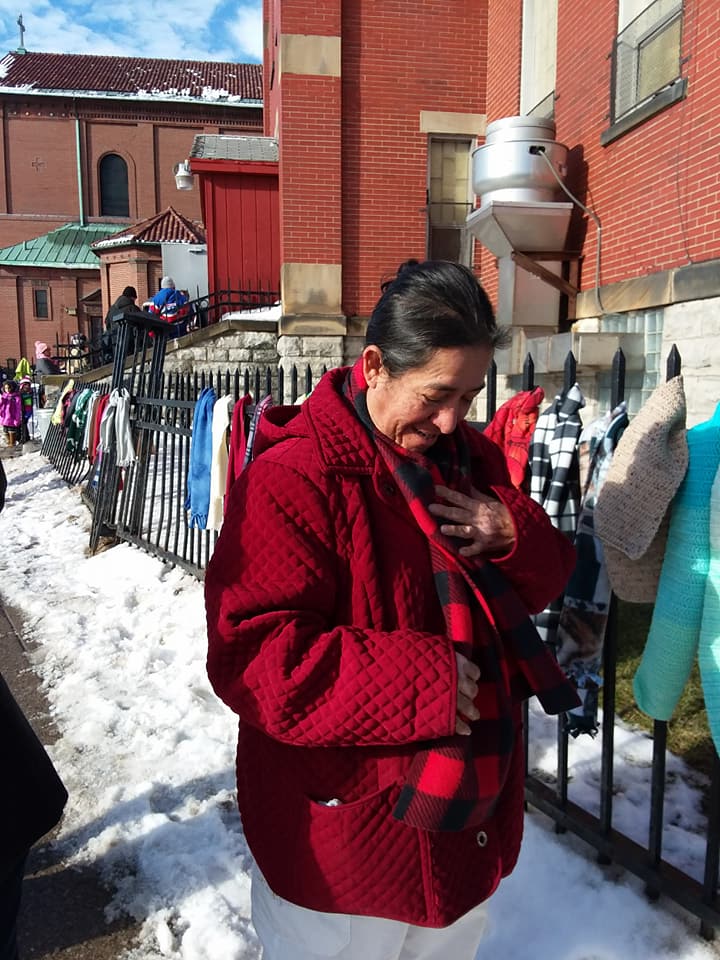 (BUFFALO, NEW YORK) – In recent weeks, the temperatures have dipped way down to zero and the wind chill has been registered at more than minus 10 in the Buffalo area, making it even harder for those who have less to make sure they have adequate clothing to bundle up.  But for some who are in need, that changed last week, thanks to the United Steelworkers (USW) District 4 Women Of Steel/Western New York Regional Council, which handed out more than 800 winter hats, coats, gloves and scarves to the needy across the Buffalo area.

“It was ‘unbelievable,’” Women of Steel Regional Council Chair Cindy Marlow told WNYLaborToday.com after the items were distributed to those in need at a variety of food pantries and women’s centers in the city. “(The recipients’) ‘Reaction was more of disbelief’ (that someone would do this for them).” 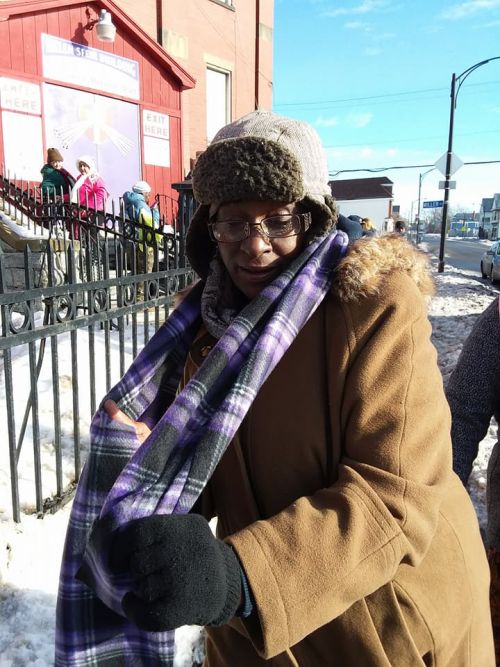 The USW District 4 Women of Steel/Western New York Regional Council’s annual Tree Wrapping Event was started back in 2015 as a way to give back to the local community.  Many of the group’s Members knit, Marlow said, so the drive turned out to be a natural.

Over the years, the group has distributed more than 2,000 pieces – with many Members across the region - which stretches up into Niagara County and down into the Southern Tier, coming through year after year to make the event a success. 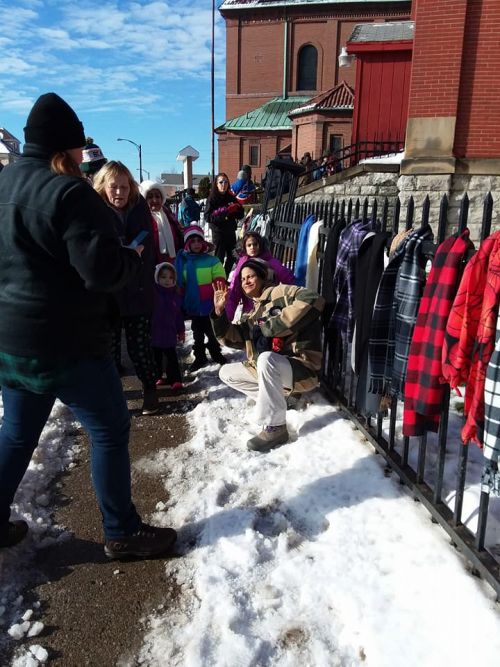 Marlow, who knitted 60 of the items herself, was overwhelmed by the reaction the USW group of women received as they delivered and then handed out the clothing to help keep those in need warm: “There were a line of people standing outside the St. Luke’s Mission of Mercy (on Buffalo’s East Side) and ‘we got swamped’ as they were picking out things.  I was thinking: ‘What the hell is going on out there’ (with so many people in need).”

In addition to St. Luke’s, the donations - with at least 75% being hand-made by Members of the USW Women of Steel Regional Council - were also distributed at Queen of Peace House, the Thankful Baptist Church and the Matt Urban Center of Hope.

The Union Members decorated trees, fences, stair railings and shrubs with the items at each location with a note: Free To Take To Help You Keep Warm – Distributed By The United Steelworkers Women of Steel WNY Council. 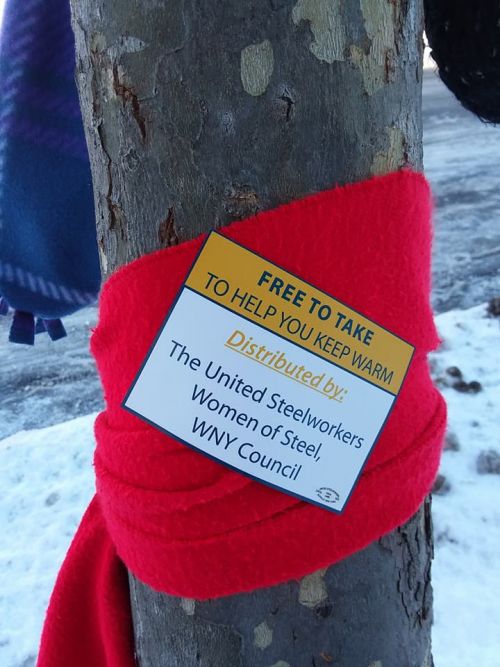 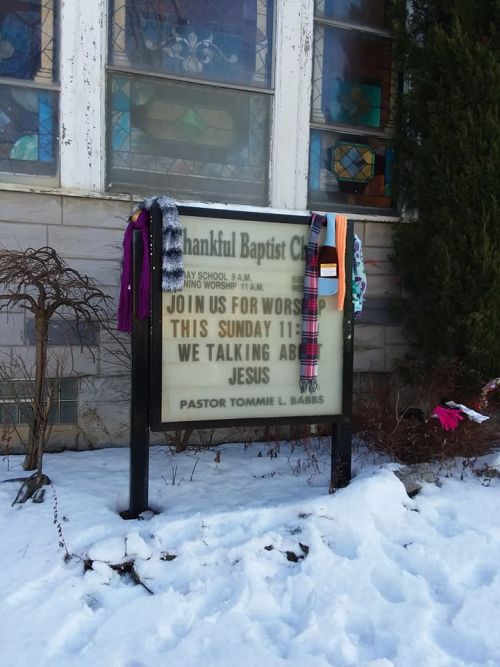 “Some were ‘really thrilled,’ some were ‘in disbelief,’” Marlow told Your On-Line Labor Newspaper.  “At the Matt Urban Center we had a couple holding a couple of garbage bags (which contained their belongings) who asked if they could have some gloves.  We ‘felt really bad for them.’” 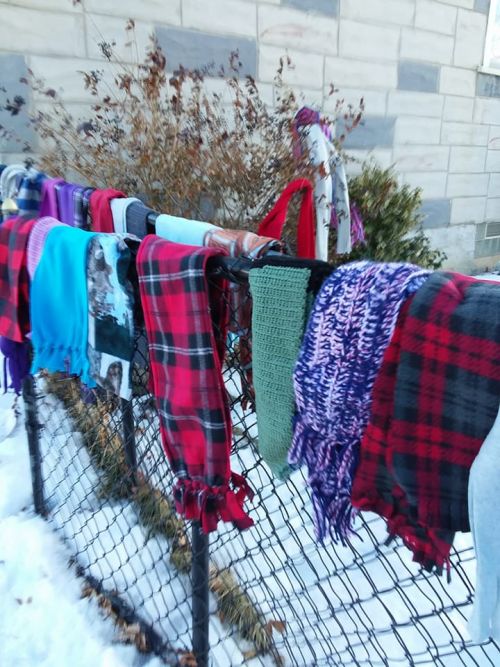 USW District 4’s Women of Steel group is more than 30 years old now, with its roots being established by the Union first in Canada before it grew to encompass the United States, Marlow said.  There are more than 30 USW Members who participate in the Western New York Regional Council’s Women of Steel Chapter and there are five Councils across District 4, including Central New York, New England, New Jersey and Maine, she said.

“Every female USW Members is a ‘Woman of Steel,’” Marlow told WNYLaborToday.com.  “It gives women ‘a voice in the Locals’ and also ‘provides a platform’ for those who wish to get on committees or run for Union Office.”