In Toronto: Unions & Activists Rally Against Tim Hortonsâ Benefit Cuts, As Well As Managementâs Bullying Of The Coffee Chainâs Workers 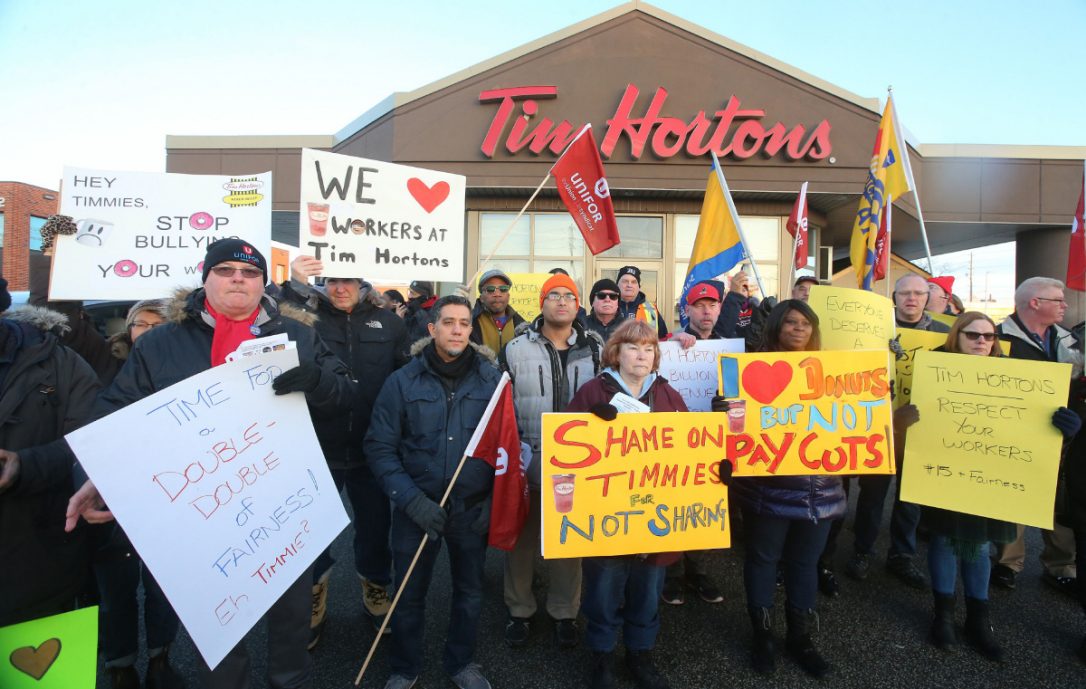 (TORONTO, CANADA) – United Food & Commercial Workers (UFCW) Canada Activists joined with Workers, Unions and community groups at Tim Hortons locations across Ontario on this week to protest the company’s benefit cuts and bullying of its Workers in response to the province’s recent Minimum Wage Increase.

Organized by the Ontario Federation of Labour - in partnership with the $15 and Fairness Campaign, UFCW Canada and other Unions, the rallies called on Restaurant Brands International – the company that owns Tim Horton’s – to order all its franchises to stop punitive actions against Workers as a result of Ontario’s Minimum Wage increasing to $14 per hour this month.

The protests came in response to reports that Tim Hortons Franchise Owners in Cobourg and some other Ontario locations had cancelled paid breaks for Employees and started requiring Workers to pay for a portion of their health and dental benefits due to Ontario’s Minimum Wage Increase.  A franchise in Scarborough, meanwhile, ordered Employees to put all of their tips in the store cash till, citing the Minimum Wage Hike as the reason for the new rule.

"Stripping Workers of their paid breaks, benefits, and tips ‘simply because they are now making a better wage is not only unconscionable, it’s un-Canadian,’” UFCW Canada National President Paul Meinema said.

“Our Union is therefore calling on all Tim Hortons franchise owners, and all employers in Ontario, ‘to live up to the spirit of the law and pay Workers what they are owed without punishing Employees for making an improved wage,’” the UFCW leader added.

UFCW Canada’s participation in the Minimum Wage Rallies is just one of many actions the Union is taking to support the rights of Workers at Tim Hortons.

In addition to the rallies, UFCW Canada has also launched a Social Media Campaign demanding justice for Tim Hortons Employees and encouraging Workers at the popular coffee chain to stand up for their rights by joining the Union.

To Directly Access This Labor News Story, Go To: www.ufcw.ca/index.php?option=com_content&view=article&id=31794:activists-rally-against-tim-hortons-benefit-cuts-bullying-of-workers&catid=9913&Itemid=6&lang=en

And To View The Campaign, And To Show Your Support For Tim Hortons Workers, Click Here.