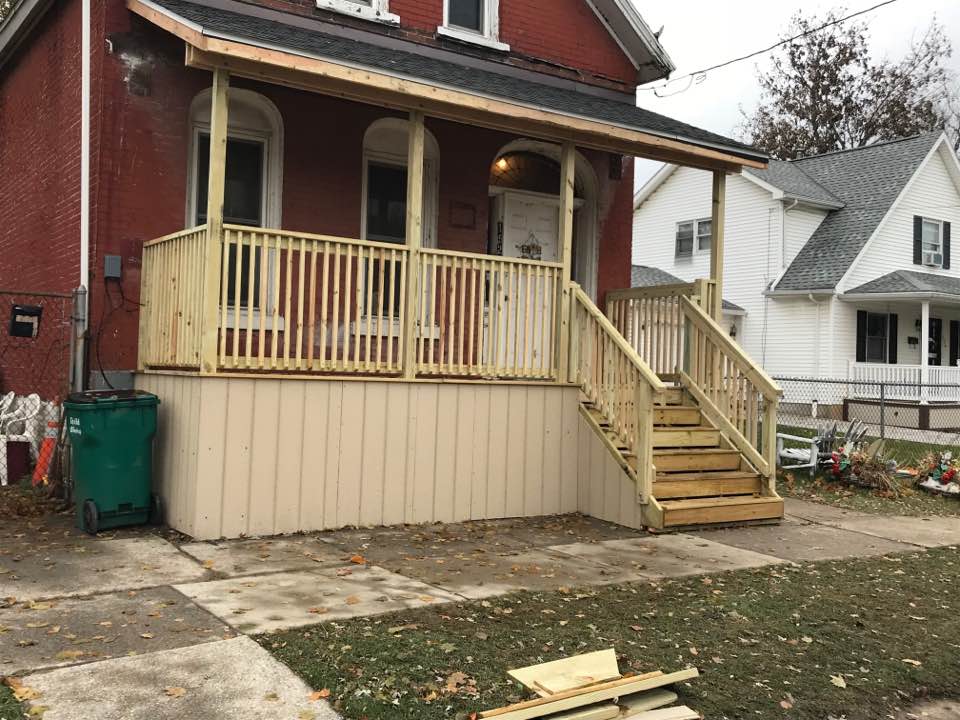 (BUFFALO, NEW YORK) – In August, a call went out to Buffalo’s Labor Unions from the City’s Fruit Belt neighborhood – an elderly woman desperately needed help.  Her Mulberry home, a structure that has sat in this historic community since 1880, was in dire need of repair before Winter came a calling.  Now, just a few months later, JoAnn Anderson is marveling at what has been accomplished – compliments of the Buffalo AFL-CIO Central Labor Council and several of its Affiliated Member Unions – as well as several more from the Buffalo Building & Construction Trades Council and the Coalition for Economic Justice (CEJ).

Fruit Belt residents have faced intense pressures of gentrification and displacement in recent years as the Buffalo Medical Corridor’s population and traffic have surged, with property and housing prices in the Fruit Belt outpacing residents’ ability to afford them.  In addition to the threat of rising housing prices, many long-time residents face a constant struggle to maintain their historic - yet deteriorating - homes.  So this so-called Labor of Love Home Renovation Project involved making a number of repairs to Ms. Anderson’s home: A new porch; a new custom-made window; repaired steps; and a fixed foundation.

“I am ‘so grateful’ for the volunteers - ‘God is good,’” Ms. Anderson told a local TV station as all gathered outside her home in the shadow of Buffalo’s growing Medical Corridor last week to celebrate their good work.  “I ‘appreciate every one of them, for what they’ve done for my home.’  My neighbors ‘had been worried for me’ because I like to sit on my front porch.  ‘They certainly took care of me.’  ‘I absolutely love it!’  ‘Everyone comes by and gives me the thumbs up for such a beautiful porch.’  I am ‘truly grateful of the support Mr. John Mudie has given.”

Mr. Mudie is John Mudie, President of the Buffalo AFL-CIO Council and Executive Vice President of Communications Workers of America (CWA) Local 1122, who told WNYLaborToday.com that after a CEJ Membership Meeting that was held in early Summer, he responded to an individual after being told that “Labor ‘doesn't care about’ the Fruit Belt.”

Shortly after that, a home on Mulberry Street was targeted and work began.  Mudie reached out to a number of volunteers and local business, both Union and non, who came through.

“Ms. Anderson's residence ‘was in dire need of repairs.’  It was ‘unsafe’ for her to be sitting or walking on and ‘it would not have made it through the Winter,’” Mudie said.  “Her porch roof was ‘literately falling off the house and the floor boards were not even nailed to the frame any longer.’  ‘We knew we had to do something.’” 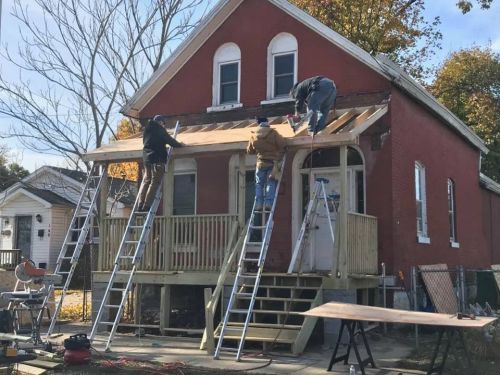 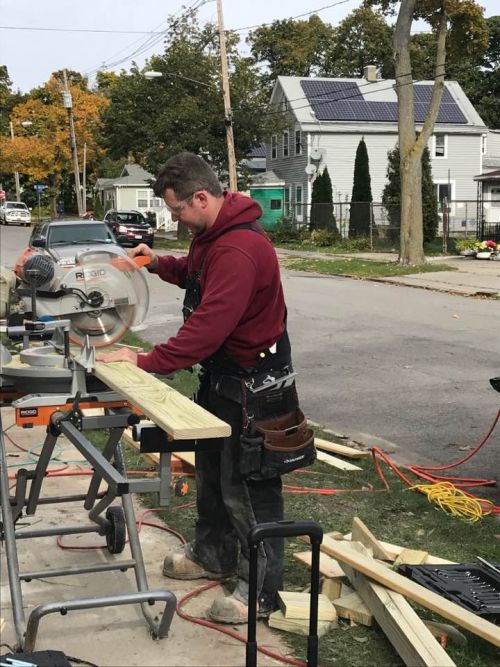 “Chris Stone of the Northeast Regional Carpenters’ assessment was (the existing porch) ‘had to come down and be rebuilt.’  At that time ‘we thought we would be able to use the original piers as our foundation for the new deck frame,’” Mudie said. “We then reached out to John Massaro (at Laborers Local 210).  John ‘was great.’  He was able to secure some of Local 210’s Members (Clinton Moultrie, Dan Raczka and Apprentice Joe Page, as well as Local 210 Trainer Mark Grzeskowiak) and a man lift (the use of which was donated by Chris Beal at Iroquois Bar) and a dumpster.” 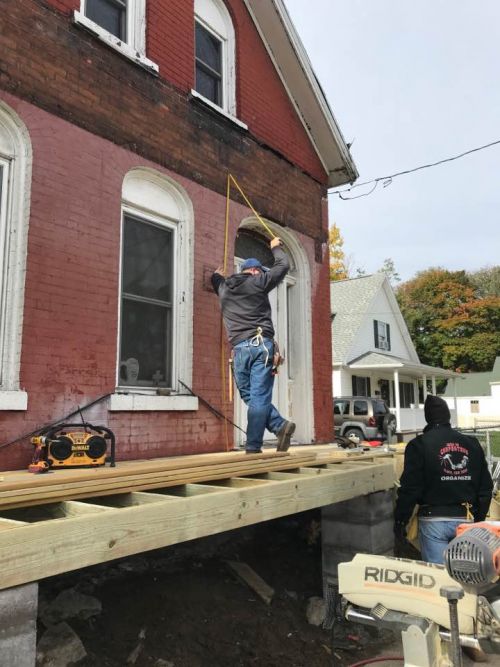 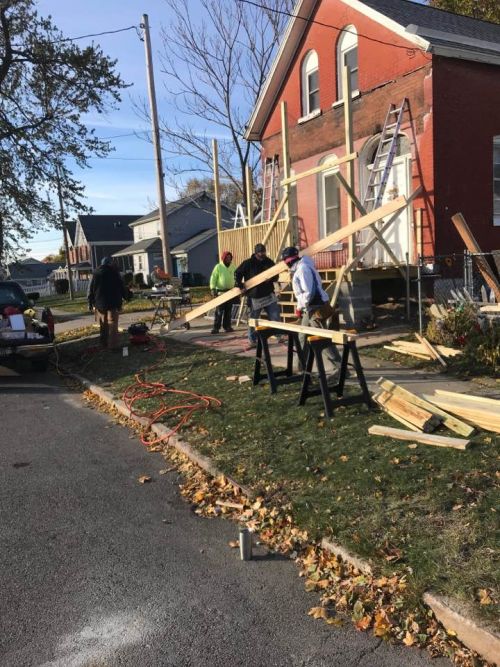 Continued Mudie: “So in mid-September they arrived, ‘ready to go.’  During the next few hours they instructed the other volunteers to ‘work safely’ while preparing the structure for demo - removing shingles, cutting trusses and deck boards.  Mark Grzeskowiak ‘took a few swings’ with a sledge hammer at a cross beam.  ‘On the third swing the whole roof came down on top of the deck, which subsequently collapsed causing the brick piers to disintegrate.’  After cleaning it all up ‘we realized there was a giant hole, as well as weak spots’ in the foundation.  We knew another Trade ‘would be needed before we could do anything.’  A call was made to the Bricklayers and (Union Representative) Todd Flynn was able to provide Marty Jones to assist.  Marty, after completing his ‘normal’ eight hours (at work) ‘would come over and do what he could.'  He was ‘able to convince’ his fellow Bricklayers Local 3) Brothers Steve Gaulin and Gerry Yeager to assist.  Marty and his fellow Bricklayers ‘were so professional and courteous’ to Ms. Anderson.  Marty ‘re-pointed the foundation and filled in the hole.’  We were ‘now ready for’ the Carpenters.  After Chris Stone estimated the material we needed, calls were placed for the orders.  We ended up going through (84) Lumber in Elma, ‘but they told us they did not deliver on Saturday.’ However, ‘after explaining what we were doing, John Santiago, a salesman with (84) Lumber, contacted his corporate office and got it delivered on a Saturday.’”

Looking back, the effort “highlights how Organized Labor stands together with Buffalo in times of need,” WNYALF Organizer George Boger said.  “The vitality of Buffalo’s neighborhoods, including those in the Fruit Belt, are ‘dependent’ on Labor’s commitment to the community, ‘along with the community’s commitment to Labor,’” Boger said.

“It’s ‘very important (that Labor) gives back,” Laborers Local 210 Business Agent Massaro told WNYLaborToday.com.  “John (Mudie) asked us to donate the demo work for her dilapidated porch, which took a couple of hours.  Our Union’s Members help build so many projects and it’s ‘always good’ to give back.  It was ‘very gratifying and we wouldn’t hesitate to do it again.’” 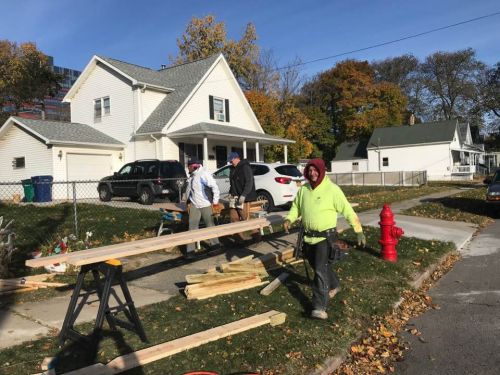 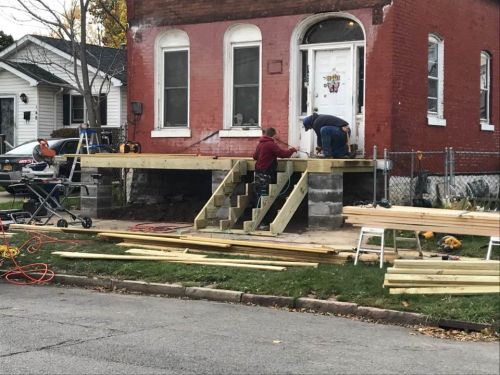 Roofers Local 74 Business Manager Getchell told WNYLaborToday.com: “We put up the new roof on her porch.  ‘It was a good feeling, especially being recognized publicly for what we volunteered to do.’  Organized Labor ‘gets enough bad press.’  ‘We were very pleased and were very happy to be part of this effort.’”

Added CEJ Organizer Asim Johnson: “Ms. Anderson was the ‘priority for bringing improvements into the community.’  This is the ‘season of giving and we want to give to those in need.’  ‘I knew through the relationships we have with Labor that it would be done.’”

WNYLaborToday.com Editor's Note: The Photos That Appear With This Labor News Report are Courtesy of Buffalo AFL-CIO Labor Council President John Mudie Via His Facebook Page.