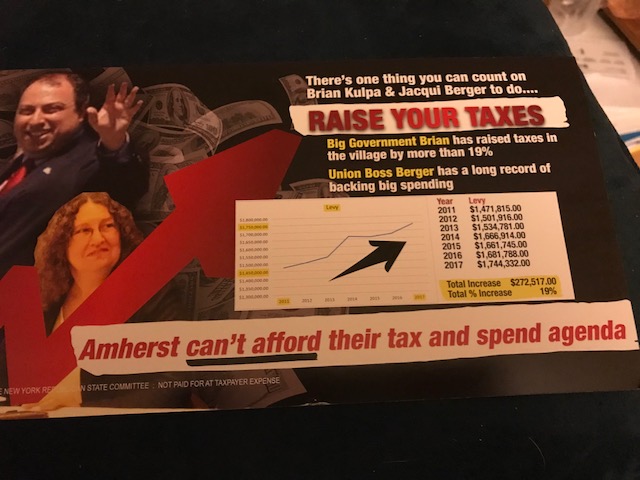 Of course it started with the Statewide, Labor-led, crushing defeat of the proposed New York State Constitutional Convention, which went down by a margin of 97.1% to just 2.1% (Read Your On-Line Labor Newspaper’s November 8th Labor News Report, Headlined: Organized Labor ‘Revels In The Massive Defeat’ Of The New York State Constitutional Convention – Proposition ‘Goes Down’ By An Overall Tally Of 97.9% To Just 2.1%).

Here in Western New York, it ended with Labor’s successful efforts that resulted in Democratic majorities being elected in the Erie County Legislature and with both the Amherst and Cheektowaga Town Councils – two of Buffalo’s major suburbs.

And the icing on top of the cake was United University Professions (UUP) Union Member and Western New York Labor Activist Jacqui Berger not only winning a seat on the Amherst Town Council, but being the top vote getter with 14,418 tallies.

“While ‘we all were feeling a bit exhausted, it was a very, very good day - we haven’t had (and Election Day) quite like this in some time,’” Lipsitz (Pictured Below/WNYLaborToday.com File Photo) said.  “We’re ‘feeling very, very good right now to keep’ the County Legislature ‘Democratic – as well as stopping’ the Constitutional Convention.”

Informing, educating and mobilizing the area Union’s Membership, many of whom participated in Labor Walks across the region, and participation in pre-election rallies that focused on the “terrible campaigns” Republicans were running against Democrats – including the GOP sending out a mailer (below) that called Berger a Union Boss, helped produce many victories, he said.

“Now ‘we will have reform’ at the Erie County Industrial Development Agency, ‘which will be good for the local economy, not to mention Labor beat back money poured into (Republican efforts) by (former State Gubernatorial Candidate and Buffalo Developer) Carl Paladino,’” said Lipsitz, who along with Buffalo AFL-CIO Central Labor Council President John Mudie hold board seats on the Erie County Industrial Development Agency.

“We ‘got back’ Democratic Majority in the County Legislature and now at the IDA (Industrial Development Agency), we can ‘hopefully get moving on helping create more affordable housing so it doesn’t push out more people who live in their city neighborhoods,” the Buffalo Labor Council President told Your On-Line Labor Newspaper.

Despite the losses of Labor-endorsed Democratic candidates in the Erie County Sheriff’s and the Erie County Clerk’s races, Lipsitz said a strong message” was sent to Republican Sheriff Tim Howard, who defeated challenger Bernie Tolbert by a little more than 3,000 votes.

“It ‘shows people are tired of (some elected officials’) stance on bigotry,’” he said.

Dressed in his county sheriff’s uniform, Howard participated in and spoke during a rally held earlier this year in Downtown Buffalo, which included White Supremacists, Alt-Right supporters and supporters of Donald Trump – some of whom waved a large Confederate flag.

As a result, Howard was met with a chorus of criticism for doing so.

Meanwhile in Amherst, Berger told WNYLaborToday.com that she was “still in shock” by being the top vote-getter in the Town Council race: “It was ‘really exciting, but nerve-wracking.’  In the end, ‘it was a sweep’ of the Democratic Party candidates (for the Amherst Town Council).”

Berger - who’s been a UUP Member for 15 years, serving on the Executive Board and as a Delegate at Empire State College in Buffalo, where she works as a teaching Faculty Member, has been involved in working so many elections over the years that she knew exactly what she had to do: hit the streets and talk individually with Amherst voters.

“It was ‘a lot of hard, hard work, but I did it - and it’s starting to sink in,’” she told Your On-Line Labor Newspaper.  “I ‘wore out one pair of shoes that literally crumbled while I was walking in them.’  Going door-to-door, ‘I got a lot of very positive feedback – including the fact that I was a Union Member, which I am very proud of.’”

In an August interview with WNYLaborToday.com as she kicked off her campaign, Berger – who said he has spent her life “fighting for and speaking up for the voiceless” - said she wanted the voices of Amherst residents to be heard by the Town Board Members after years of “out of control development ‘without discussion on needed and improved’ infrastructure.”

And despite a last-minute Republican mailer that labeled her as a Union Boss (see below) who they alleged had a long record backing big spending - Berger won. 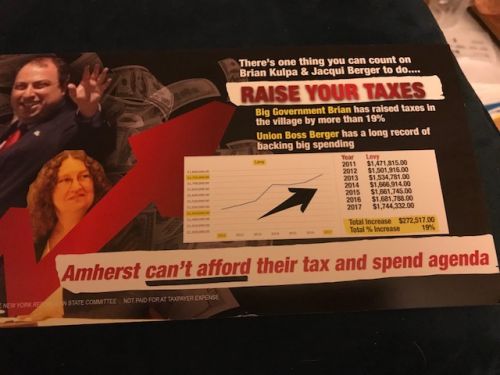 “Their ‘negative piece on me actually helped my campaign,’” Berger said (Pictured Below/WNYLaborToday.com File Photo).  “I ‘got so much feedback at the polls’ - Union Members ‘were so pissed off’ (by the mailing).  ‘As I said, we are Union Members and proud of it.’”

While Organized Labor here in Western New York and across New York State “did a good job of mobilizing our Membership” in the 2017 Elections, Buffalo AFL-CIO Labor Council President Mudie told WNYLaborToday.com that “more work needs to be done” in preparation for the 2018 Mid-Term Election.

“I think ‘we did quite a bit of work improving the overall numbers (of getting Working People out to vote) in an off-year election, but we can continue to improve on that.’  ‘We got the job done with our Membership.  In 2018, ‘we’ll have the opportunity to take back the House and possibly the Senate, as well as work in the interim to get rid of forty-five’ (President Donald Trump),” he said.