McLennan Honored For His âWonderful Historyâ Of 30-Plus Years Of Representing Working People, âOne Of Those Guys Who Did What He Had To Do And Never Looked For Anything In Return,â Says Buffalo AFL-CIO President John Mudie

During a sashing ceremony held at the Buffalo Irish Center, McLennan (Pictured above, in the middle, with Western New York AFL-CIO Area Labor Federation President Richard Lipsitz on the left and Buffalo AFL-CIO Central Labor Council President John Mudie on the right) was officially introduced as the Grand Marshal of the 2017 Buffalo AFL-CIO Central Labor Council’s Labor Day Parade, which will be held in South Buffalo on Monday, September 4th.  The Labor Day Parade kicks off at 12 Noon, beginning at the Irish Center on Abbott Road and continuing down Abbott into Cazenovia Park, via Cazenovia Street, where a massive Labor Picnic will be held.

Asked what is the first thing he thinks of when the name Robert McLennan is said, Buffalo AFL-CIO Labor Council President John Mudie told WNYLaborToday.com: “Unselfishness.”

“Bob is one of those guys ‘who did what he had to do and never looked for anything in return,’” said Mudie, who also serves as Executive Vice President of Communications Workers of America (CWA) Local 1122.  “And - ‘he’s a fellow Scotsman, what can I say?’”

Western New York AFL-CIO Area Labor Federation (WNYALF) President Richard Lipsitz told Your On-Line Labor Newspaper: “Every year Organized Labor ‘tries to honor’ a Labor Leader ‘who does wonderful work with his or her Union and generally for our Labor Movement.’  Bob ‘has done that brilliantly for thirty years now.’  His being named Grand Marshal of the parade ‘keeps that tradition going.’  He is a ‘tough advocate’ for our Labor Movement.  He is a ‘very smart man and a reasonable man as well.’”

McLennan told WNYLaborToday.com that “it is a great honor” to serve as Grand Marshal of Buffalo’s Labor Day Parade, which will carry the theme this year of: Unions Make America Great!  McLennan will be further honored by the OPEIU, whose National President - Richard Lanigan - and Region II Vice President - Michael Goodwin - will travel from New York City to Buffalo to march alongside him in the Labor Day Parade.

“Unions are ‘going through some tough times now, worse than when it was during President (Ronald) Reagan’s Administration,’” he told Your On-Line Labor Newspaper.  “And we are ‘facing challenges from so many Anti-Union Groups,’ but it is our ‘solidarity’ that brings us together.”

“Unions ‘have been there all the years of my life,’” the 64-year-old McLennan said.  “My father was a Labor Leader with the Railroad Union and my grandfather was a Union Organizer for the Rubber Workers Union and the United Auto Workers Union.  ‘I’ve always believed’ in the Union Movement.’”

McLennan spent 32 years at the U.S. Postal Service, serving in NALC as a Steward, Vice President and President for 18 years, which is believed to be the longest term served by a Branch 3 President in the history of the Local Union, whose roots go back to 1889.

For nearly four years, McLennan served as Labor Liaison for New York State Senator Tim Kennedy, a South Buffalo Democrat, before accepting a position to become the Business Representative of OPEIU Local 153 here in Buffalo at the end of 2016. 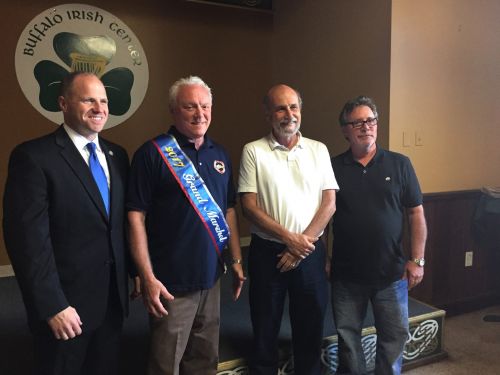 On a personal front, McLennan has immersed himself into the well-known Sportsmen’s Tavern (http://sportsmensbuffalo.com/), also known as the Sportsmen Americana Music Foundation - a highly-respected live music venue in Buffalo that attracts national talent from across the country.

McLennan serves as its President and jokingly likens it to “running a Union” – “It’s organizing and planning events and getting volunteers involved.”

The Sportsmen’s, with the help of McLennan, has also featured a number of Union-themed musicians and Labor-themed events over the years, including tributes to Woody Guthrie and Pete Seeger.

“He’s ‘always looking to do something that ties in Labor,’” says WNYALF President Lipsitz, whose daughter married McLennan’s son.

On another front, it was also announced the sponsor of the Council’s Post-Parade Labor Day Picnic - once again - is BlueCross BlueShield of Western New York.