Even Though âSomething Wicked This Way Comes,â AFSCMEâs Ready To Fight The Coming Republican Attacks On Public Workers 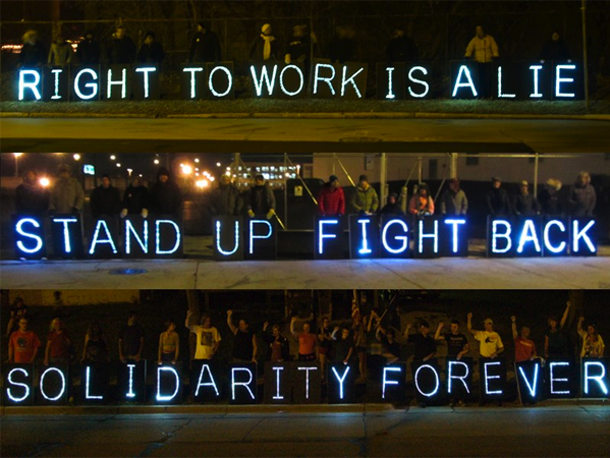 Something Wicked This Way Comes is the title of a Ray Bradbury novel, but it’s also a warning to millions of Public Service Workers who’ve built lives of dignity and respect, thanks to their Unions.

The wicked in this case are court cases backed by corporate billionaires like the Koch Brothers that may soon get a hearing before nation’s highest court.

It’s part of their campaign to weaken Labor Unions.

And while they’ve tried it before and failed, this time they hope to succeed.

Public Service Workers – whether or not they belong to a Union – could lose not only their bargaining power to improve wages and benefits, but also their ability to have a strong voice on the job and improve the services they provide to make their communities run.

The American Federation of State, County & Municipal Employees (AFSCME) can see into the future by looking into the past – specifically, at what happened to Private Sector Workers when their Unions declined or disappeared.

“Between 1979 and 2013, the share of Private Sector Workers in a Union has fallen from about thirty-four-percent to eleven-percent among men, and from sixteen-percent to six-percent among women,” according to a report the Economic Policy Institute (EPI) issued last year.

In that time, wages hardly moved.

In fact, for men without college degrees who weren’t Unionized, “real wages today are substantially lower than they were in the late 1970s,” according to the report.

This is what happens when Unions are weakened, whether because of a decline in Membership or because extremist politicians pass laws depriving Workers of their Collective Bargaining Rights.

But there is a solution.

“Rebuilding Collective Bargaining is one of the tools we have to ‘reinvigorate’ wage growth, for Low and Middle Wage Workers,” said Washington University sociologist Jake Rosenfeld, one of the report’s authors.

Corporate-backed groups are going after Unions by pushing so-called Right-To-Work (for less) Laws at the State level.

At the National level, they pushed a U.S. Supreme Court case called Friedrichs v. California Teachers Association, which would’ve made Right-To-Work the law of the land.

The eight remaining justices deadlocked and the case was returned to a lower court, where it remains.

But that’s not the end of the matter.

Several cases that make essentially the same Anti-Union arguments as Friedrichs and seek to undermine Public Service Unions across the country are making their way through the court system.

After soon-to-be President Donald Trump’s choice to replace Scalia is approved by the GOP-controlled Congress, the Supreme Court could accept one of those cases and side with those same forces that were behind the Friedrichs case.

It’s possible that even a justice nominated by Trump and approved by the current Congress may see through the deception at the heart of these cases.

Regardless of what happens, AFSCME will continue to fight for its Members.

“The question before us, then,” asks Labor Organizer Dave Kamper, “is: ‘how much stronger’ can Unions make themselves ‘before the full force of the onslaught hits us?’”

AFSCME’s already increased its Membership, despite the attacks.

And AFSCME is determined to grow even stronger in the years ahead.

We are AFSCME Strong and we never quit making our communities and our nation better places to live.

To Directly Access This Labor News Report, Go to: www.afscme.org/blog/a-threat-to-public-service-workers-is-headed-our-way-were-ready