If I Were In Charge... Young Unionists Speak Out 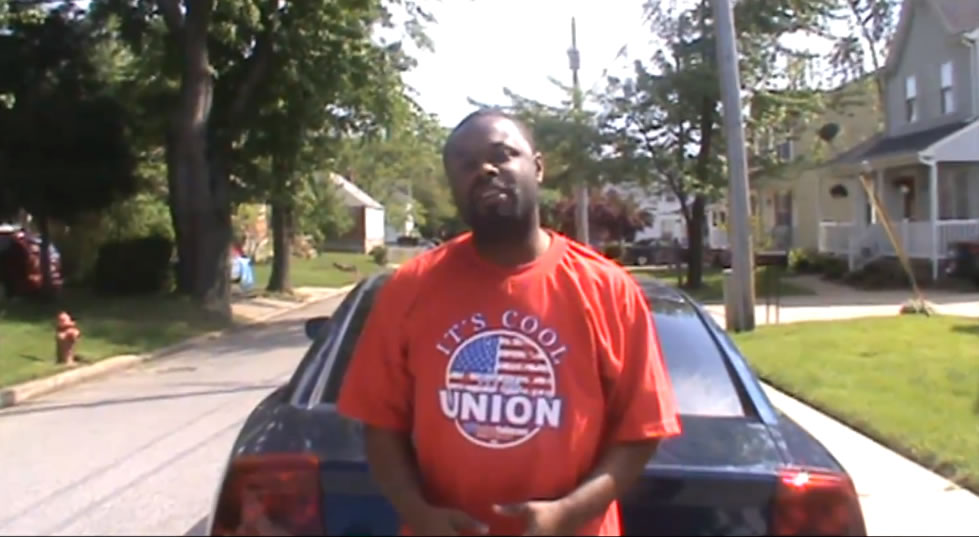 WNYLaborToday.com Editorâs Note: Your Regional, On-Line Labor Newspaper has republished â over the course of time â a number of worthy columns authored by Cory McCray, who serves as chairman of the Baltimore, Maryland-headquartered Young Trade Unionists Group (pictured above in one of WNYLaborToday.comâs âItâs Cool To Be Unionâ T-Shirts).  Recently, the New York City-based Monthly Review magazine published the following story on its website involving McCray and his opinion as to how the Occupy Wall Street Movement and the Young Trade Unionist Movement ties in together, which WNYLaborToday.com wanted to bring to the attention of our viewers/readers:  Hereâs the direct link to the Monthly Reviewâs story on McCray: http://mrzine.monthlyreview.org/2011/nowak221111.html.  He can be reached directly via e-mail at corymccray@gmail.com, on Twitter @corymccray or by visiting his website: www.corymccray.com.

(BALTIMORE, MARYLAND) - If you head down to the IBEW (International Brotherhood of Electrical Workers) Local 24 Union Hall Auditorium on West Patapsco Avenue in Baltimore on the first Tuesday of any month, you'll encounter a meeting of an energetic group of young Union Members from the Metro Baltimore-Washington, D.C. area.

The Young Trade Unionists (YTU) was created in November 2009 by one of the founders - Cory McCray, a graduate of both the Baltimore City Public School System and the five-year IBEW Apprenticeship Program.  Participants in the YTU include young Workers from the IBEW, the UFCW (United Food & Commercial Workers Union), and Teachersâ Unions, Building Trades, Public Employees' Unions and other sectors.

On the heels of a massive and recent rally and march across the Brooklyn Bridge in New York City - and coinciding with the arrival of Occupy Wall Street (OWS) Marchers in Washington, D.C. â the Monthly Review spoke with McCray about the ways in which the OWS Movement and young Workers might deepen their bonds.

McCray had participated in the 28th Biennial Convention of the Maryland State and District of Columbia AFL-CIO, where Membership passed a resolution for its Members to treat Occupy Sites in D.C. and Baltimore as they would a formal picket line.

MR: How have Young Workers in Baltimore - and all of Maryland - been perceiving, and talking about, the Occupy Wall Street Movement?

Cory McCray (CM): Amongst young Workers, it's something that's definitely supported due to the fact that in Baltimore, as young Workers, we've seen multipliers for pension programs go up, we've seen the cost of low wages and manufacturing jobs going overseas and numerous other actions that have been taken, not only amongst Workers in general but young Workers that have been affected the most.  I attended the State AFL-CIO Federation Conference and one of the actions that the Young Trade Unionists proposed from the Baltimore side was to show solidarity at a meeting on December 6th at McKeldin Square.

What do you think are some of the possibilities for Labor and OWS to work together?

CM: I think they go hand in hand because the Labor Movement has always fought against the foreclosures, the high cost of education, the workplace violations, the large corporations. . .  So many of the things that OWS are bringing to attention and putting to the forefront are always things that Labor has taken action on.  But right now it's such a visible tone because it's very strategic and placed all across the country.  Right now, the Labor Movement has a great possibility of having something come to fruition with the OWS movement.  But I think that this is probably the beginning, that's what it looks like.  And it's ready to come to something big.  And when we do these types of things, we always are going to need partners.  It's definitely not only going to be Labor.  It's also going to have to be the communities, the churches, LGBT, the minority factor.  I think that it takes everyone as a whole to lift up the Workers.

Have you noticed any difference in the way between younger Workers and older Workers have been thinking and talking about the OWS Movement?

CM: I think that the older Workers are definitely showing support.  When I was talking to a lot of the older Workers, they said, "I can see myself in the people in OWS - during the 70s, 60s, in the marches."  And they're just trying to show support in any type of way, letting them know they're not trying to take the issue and get in front of it.  You know how sometimes something can be coming and something can be bursting and then you'll find that people will jump on the bandwagon.  And then you look and they're controlling the issue.  Well, they're kind of letting OWS control itself and just show support.

The Maryland/D.C. AFL-CIO has approved a resolution calling on its Members to treat OWS encampments in D.C. and Baltimore as they would a formal picket line.  Do you know the history of this resolution or what might result from the resolution?

CM: I was actually there when the resolution was passed.  And I think that it's another good thing for Workers, it's another good thing for OWS and all the Occupy Movements across the country.  It's to say, "Labor has your back.  Labor's not gonna take control of the issue, but Labor's there to support you with anything that you could possibly need."

Resolution 17/SUPPORT FOR THE "OCCUPY MOVEMENT"

WHEREAS, the Maryland State and District of Columbia AFL-CIO recognizes the rights of all people to living wage jobs with affordable Health Care, quality education, a voice on the job, fair housing and a well-funded public sector, and

WHEREAS, Occupy Wall Street is a people-powered movement that began on September 17th, 2011 in Manhattan's Financial District, and has spread to over 100 cities in the United States and actions in over 1,500 cities globally.  The Movement is inspired by popular uprisings in Egypt and Tunisia, and the Wisconsin protests earlier this year, and aims to expose how the richest 1% of people are writing the rules of an unfair global economy that is foreclosing on our future, and

WHEREAS, the Occupy Movement started at Occupy Wall Street has galvanized public sentiment and a broad-based movement protesting the corrosive power of major banks and multinational corporations over the Democratic Process, and the role of Wall Street in creating an economic collapse that has caused the greatest recession in generations, and

WHEREAS, the National AFL-CIO and Change to Win have endorsed Occupy Wall Street, a growing number of Union Activists have joined this movement, both as individual Workers, and as part of an increasing number of International and Local Union Contingents connecting their own fights to the larger demands of the movement for Economic Justice and Fairness, and

WHEREAS, in solidarity with Occupy Wall Street, Occupy Baltimore and Occupy D.C. has steadily developed an encampment and public interest in our areas, and

WHEREAS, Union and Community Organizations together have been working in coalition since the crash of the economy to force Banks to pay their fair share of taxes, and renegotiate predatory loans with home owners, governments, and non-profit agencies, and

WHEREAS, it's time to take action against the greed and corruption of the wealthiest 1% of America, who control the vast majority of our Nation's wealth and of the wealth of the world, and

WHEREAS, while the rest of us struggle, surviving on less and less, the big banks profit more and more.  They are getting rich by taking all we have.  We have paid with our lives and livelihoods so that a select few can be the richest in the world.

WHEREAS, all around the country, people are standing up and demanding accountability from banks, corporations, and from our governments, we recognize that we are not alone, and that together we have power.

WHEREAS, the Maryland State and District of Columbia AFL-CIO values the importance of peaceful civil disobedience as a continuing foundation for our work, and

THEREFORE BE IT RESOLVED that the Maryland State and District of Columbia AFL-CIO supports the Occupy Movement and encourages Union Members and Local unions to participate in the Movement, will actively support any Unionized or non-Unionized Worker who refuses to break up, "raid," or confiscate the belongings of protesters, and calls on Unions representing Public Works and public safety workers to not participate in such activity as to deny the rights of the 'occupiers', and

BE IT FURTHER RESOLVED that the Maryland and District of Columbia Labor Movement and its allies stand with our sisters and brothers of Occupy Movements in the cities and towns across the country who are fed up with an unfair economy that works for 1% of Americans while the vast majority of people struggle to pay the bills, get an education and raise their families, and

BE IT FURTHER RESOLVED that the Maryland State and District of Columbia AFL-CIO recognizes that protest movements, like strike lines and organizing campaigns, do not have curfews, are not 9-to-5 activities, and in doing so we recognize and will work to protect the right for "Occupiers" to protest 24 hours a day, on-site and with proper protection including food, medical supplies, water, and tents, and

BE IT FURTHER RESOLVED that the Maryland State and District of Columbia AFL-CIO forward this Resolution to the AFL-CIO, International Unions, Local Unions and Central Labor Bodies and

BE IT FINALLY RESOLVED that Maryland State and District of Columbia AFL-CIO will contribute $3,000 to both the OCCUPY BALTIMORE and the OCCUPY D.C. actions.