From Wisconsin to Ohio and Florida to New York, thereâs a resurgence of Union Pride & Determination building across the United States as Labor Unions and their Members join together to battle those who are attacking Workerâs Rightsâ¦

This reawakening of the Labor Movement has prompted some to declare that âWisconsin Governor Scott Walker has made it cool to be a Union Member again!â

So tell everyone with your own WNYLaborToday.com Wisconsin Red T-Shirt that âItâs Cool To Be Union! â ¢â

Shirt is silk-screened by American Images, a Buffalo, New York-headquartered Union specialty products manufacturer and an advertiser on WNYLaborToday.com.

You can also personalize your âItâs Cool To Be Union â ¢â T-Shirt with your individual Unionâs Logo on the back, as so many Labor Unions are doing.

Order now and let everyone know that âItâs Cool To Be Union! â ¢â 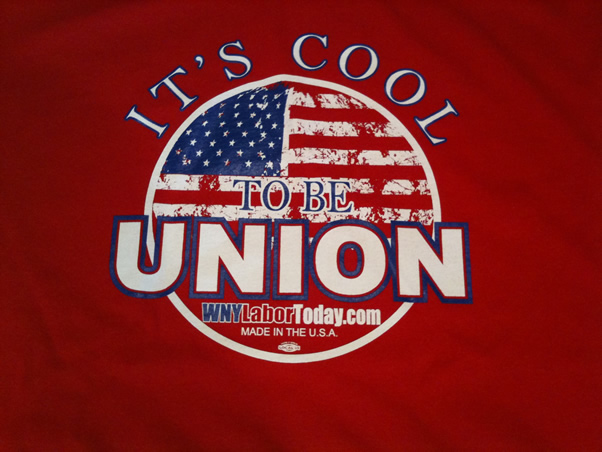 Labor Unions wishing to place large orders of âItâs Cool To Be Union! ™â T-Shirts should contact
Tom Campbell at 716-681-2300 for additional information on large order discounts and additional
costs for printing your Union Logo on the back of the shirt.